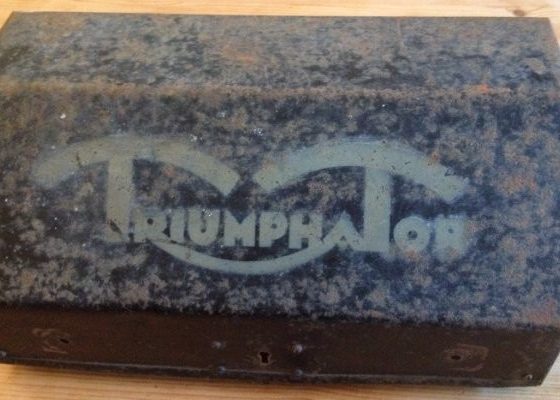 I was at an antiques event a few weeks ago and stumbled across this unusual “Triumphator”. I’ve always been fascinated by calculating machines – especially the tremendously intricate examples of the early 20th century.

These elaborate mechanisms, crammed with great ingenuity into a restricted space, have long since given way to the modern electric calculators that we are more familiar with today.

This particular specimen is a little tired cosmetically, and the base has been home at some point to a family of woodworm. But the machine itself is still in perfect working order, and I couldn’t resist the temptation to negotiate a price.

The unit weighs in at 15lbs and is packed full of interlocking cogs and pinwheels. It’s quite an absorbing experience to turn the various cranks, and to watch the machine multiplying or dividing to 13 significant digits. (I know, that’s not everyone’s idea of fun…) There’s even a loud bell that rings when the output display “overflows”, warning you that there are not enough digits available.

As far as I can make out, based on research into the model and serial number, this example dates to just after the First World War. In its time, the Triumphator must have been a leading business efficiency tool. I find it extraordinary to consider that almost 100 years ago somebody may have used this very machine to calculate their company’s monthly accounts.

Just thirty years later, Alan Turing was designing room-sized computing machines (e.g. the Bombe) to break the Enigma codes, arguably bringing the Second World War to an early close. Remarkably, Turing detected weaknesses in the Enigma machine’s output, and successfully reverse-engineered the mechanism, without ever having seen one of the actual machines – at least not in the early phases of the war. As it turned out, Enigma was based on a pinwheel design similar in many respects to the internal workings of this Triumphator, albeit combined with complex electronic circuitry.

As an Information Technology professional (and a one-time software developer), I often reflect on what has changed in our industry in the last 100 years – but also on how much of this change would have been impossible without the innovation and ingenuity of the people who designed machines like the Triumphator, Enigma and the Bombe. Of course we should not forget Pascal and Babbage, who designed some of the earliest mechanical calculators, starting as long ago as the 17th century.

As Newton said (in fact he pinched it from Bernard of Chartres), “If I have seen further it is by standing on ye shoulders of Giants”.

Most of the systems and technology that we use today rely on principles that go back to the early 20th century, and beyond. Even leading-edge software is often based largely on mathematical or philosophical concepts that were developed far earlier than we might imagine. In today’s markets that are always greedy for the new, it is all too easy to lose sight of the old.

This Triumphator now sits on my writing-desk as a reminder that innovation is sometimes about using old ideas in new ways, not just about inventing new concepts. Recognising what not to change can sometimes be the key to success.

Are you involved in innovation, either as an entrepreneur or within your industry? If these comments resonate with you (or not!) then please feel free to comment.