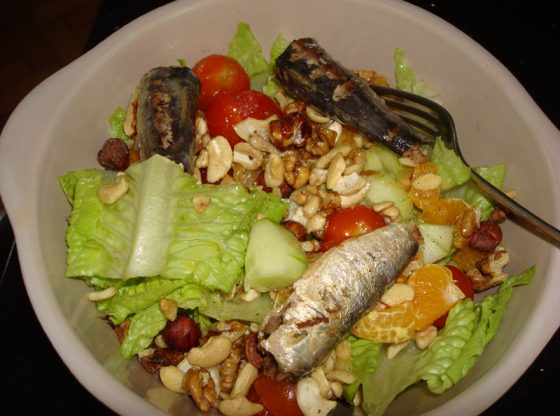 I’ve never been fussy about what I eat. Actually, that’s not true. I am fussy, but in a good way. I avoid fast food like the plague, and I’ve always preferred organic and free-range over the mass-produced output of Food, Inc.

My preference is based on common sense, the desire to remain healthy, and a taste for quality. In addition, I believe it is important to support one’s local economy and producers rather than lining the balance-sheet of yet another industrial corporation.

In summary I will eat pretty much anything – so long as it is healthy, and if possible not processed or artificial. I avoid sugary drinks and (to the best of my ability) anything with high fructose corn syrup.

Combined with an active lifestyle and significant amounts of endurance running, surely this should be enough to keep me in good shape?

Yet like so many people, I struggle with bad cholesterol and chronic weight gain. For a while now I have been resigned to this as my genetic lot. There is nothing more I can do about it that I’m not already doing.

During the last few months, my complacency has been challenged. I have heard many stories, some from close friends, about weight coming off and staying off. They feel ten years younger and their energy levels are through the roof. Health is greatly improved, with dramatic reductions in cholesterol, and in at least one case disappearance of diabetes. These stories sound too good to be true, but as they come from people I know and respect, I have to listen to them.

I approach most things in life as a sceptic, meaning simply that I take nothing for granted. This does not make me negative – on the contrary, I am ready to give any idea a chance, but it has to stand up to scrutiny (the original meaning of scepticism) and rigorous testing.

This approach leads me to dismiss dietary trends, for the most part, as marketing-driven social or commercial fads that are designed primarily to sell books and products.

I watch people try them and fail, either because the systems don’t work, or because they are too complicated for any normal person to sustain for more than a few weeks. They fail my tests of logic, or science, or plausibility, or simplicity, or commercial honesty, or observable success rate.

In my world, a dietary trend has to pass all these tests before I will even consider trying it for myself. To date I have never come across anything that passed just one test, let alone all of them.

Enter the paleolithic diet. From the Wikipedia article linked here:

Paleolithic nutrition is based on the premise that modern humans are genetically adapted to the diet of their Paleolithic ancestors and that […] an ideal diet for human health and well-being is one that resembles this ancestral diet.

Proponents suggest that with the advent of agriculture 10,000 years ago we started eating grains, legumes and dairy products, which had played no part in our diet for the previous 2.5 million years. Until then we had eaten essentially the meat we hunted and the vegetables we gathered.

This change is so recent in evolutionary terms that our bodies have not had time to evolve genetically to accommodate the “new” foods. Our metabolism strains to process the starches and sugars, and arguably many of our modern health disorders spring from this root cause. Weight, insulin, cholesterol, hormones, immune system are all affected.

Interestingly the paleolithic diet is not a diet in the usual sense, but rather a lifestyle. It is based on a simple principle that is easy to understand and easy to implement: avoid certain food types, but eat as much as you want of the rest. The underlying science is intuitively plausible, and increasingly confirmed by unbiased peer reviews. Last but not least, the real-life stories in my own circle of friends provide evidence of some fairly remarkable benefits.

So for the first time since I first became concerned many years ago about my propensity to gain weight, I have reached the next step. After talking to friends and reading the literature, everything stands up to scrutiny. At this point I cannot in all honesty dismiss the concept without first trying it for myself. It would appear that I have nothing to lose and everything to gain.

So starting this weekend I am officially “paleo”. No more grains, flour, bread, pasta or rice. No more legumes (beans, peas, peanuts). No more dairy products. Minimal amounts of starchy vegetables. Otherwise as much fruit, vegetables, nuts, meat and fish as I can eat. Not difficult to remember, and actually not much of a constraint once I get used to fuelling for marathons on something other than pasta.

Here is lunch for today, after 3 hours of vigorous gardening: romaine lettuce, cherry tomatoes, cucumber, mandarin pieces, sardines, nuts, oil & vinegar dressing. I would have eaten a second bowl, except I was too full to move.

As part of my experiment I will document my progress from time to time, in the hope that it may provide insight for others following a similar path. Check back soon for my next post, and feel free to leave your comments.